Using all her guile and ingenuity, Alice has escaped the hordes of rampaging, flesh-eating ghouls to arrive on the little-known Hebridean island of Bewilderland. Her next task is to locate the secret entrance to the underground sanctuary which now houses the last vestiges of humanity. Her old friend Bob was involved in drawing up the blueprints for the hidden shelter and has kindly sent her a map of the island, together with a set instructions explaining how to find it.

Security is tight and Bob has taken extra precautions to keep the location of the bunker a secret, should the map fall into the hands of a particularly intelligent mindless zombie. To achieve the requisite level of secrecy, he's written the instructions in a rather idiosyncratic and ambiguous style, guaranteed to tax even those whose minds are fully functional!

To solve this maze you need to follow the instructions to discover the grid reference of the secret entrance. Can you help Alice reach the safety of the underground bunker before the island is overrun by the foul legions of the undead? 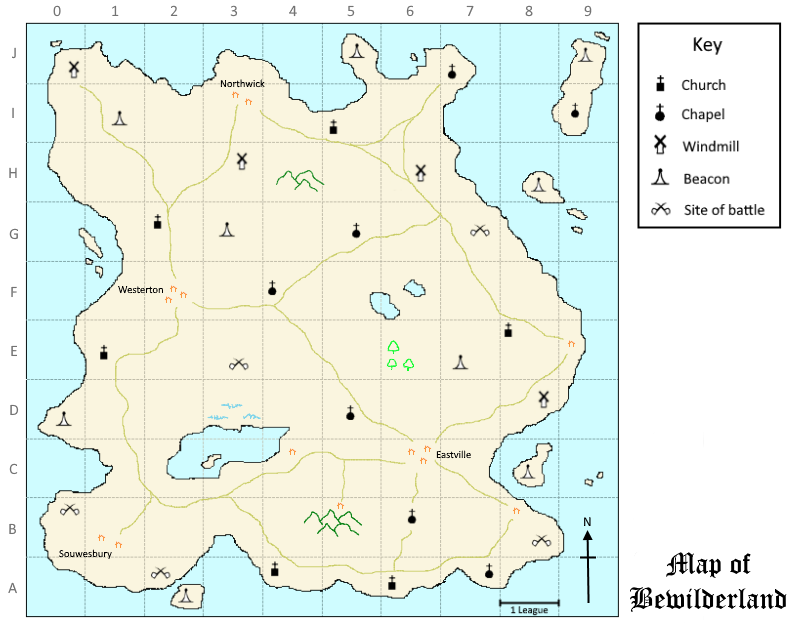 Execute each instruction in turn, starting with Instruction I. Then move onto the next instruction in the list, unless otherwise indicated. The only way to complete the maze is to reach Instruction X and execute it appropriately. If ever the instructions do not make sense in the present context, or cannot be completed, then you have reached a dead end and should try a different path.

This maze is fully interactive (click on a valid square to move there; the current instruction is shown to the right of the map), but you can also print it out and solve it by hand, if you prefer. One thing to note is that you can only move along horizontal or vertical lines (i.e. along the four compass points: north, east, south and west) when executing a particular instruction. I've tried to phrase the instructions as unambiguously as I can to indicate this, but closing every possible loophole requires a level of verbosity that would render them too difficult to scan, so I had to strike a balance. If you are solving the problem interactively, then there will be no such issues because the maze will not let you make an illegal move.